I heard my husband’s voice. “Nadia.” I felt around, feeling the sheets of our bed. I opened my eyes, slowly.

“Mitch. What happened? Where’s the baby?”

“You passed out. And… you’re still pregnant, if you didn’t notice. The baby hasn’t been born yet.” He held my hand. “I’m so glad you’re ok.”

“How long was I out?” I started to feel the contractions again.

“Well I think the baby is coming now!” My contractions were like 10 times stronger and faster than when I passed out. “Right now!”

Meet my baby girl, Selena! She’ll continue on the legacy.

Like I said before, Johnny was not happy about having a baby sibling, especially not a sister. When he woke up and saw Selena in her crib, he actually started crying. Mitch had to console him. His sister was sticking around. 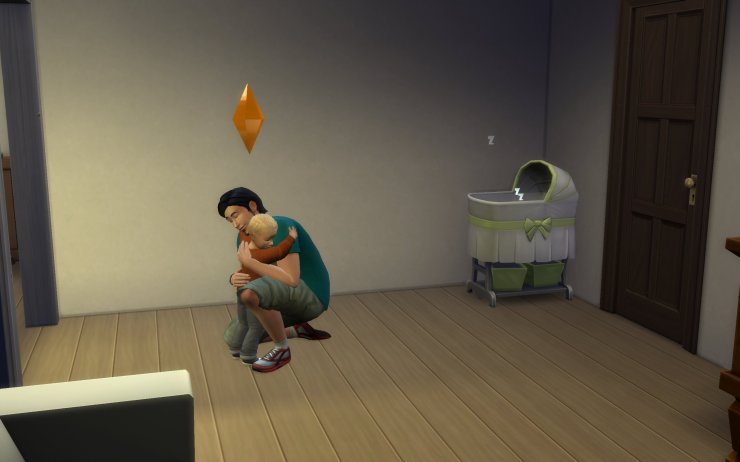 “Well you should. After all, she is your little sister. You get to be the boss, little dude.”

I grinned watching this. Mitch was already such a good father. Johnny was smiling now, after all, and Mitch made the arrival of his little sister to be a good thing.

“Sis. I am boss. Got that?” Jonathan said, talking to Selena.
He was already talking quite well, which was good. After Selena’s toddler birthday we had his child birthday.  Johnny gained the creative trait and whiz kid aspiration. He is happy to be older than his sister, he was talking to her at breakfast about how excited he is to go to school.

She babbled happily, even though she hasn’t spoken yet. He took that as agreement what he was saying. I took him to the park after. It was my first time at the park too. I was very happy to see there were monkey bars and a spaceship play structure. He was happy too.

“Johnny, listen to me.” I said. I was not going to have him lost at the park the first time we went. “You will not leave my sight, ok?”

“Because I don’t want you getting lost, or taken. You hear me?”

“Ok! I’m gonna play on the spaceship now.” he practically bolted away to play.