As the weeks went on and fall faded into winter, my little baby bump blossomed into what was a noticeable – and not all that little anymore – bump. By the third week of November, I started wearing mostly maternity shirts, and now, the first week of December, I’m only wearing maternity clothes now. It feels like so long ago that I was waiting for a bump to appear. It’s always so comforting just to look down at my bump where our little girl is. I’ve found myself laying my hand on my bump all the time, it just feels natural.

“Hey, you expecting anyone?” Dani asked.

I scrunched my face up, trying to think of anyone that might be coming. “No.”

“Well, someone’s at the door. Trying to sell us something, maybe?”

I laughed, continuing to stir the mac-and-cheese we were having for lunch. “Probably.” 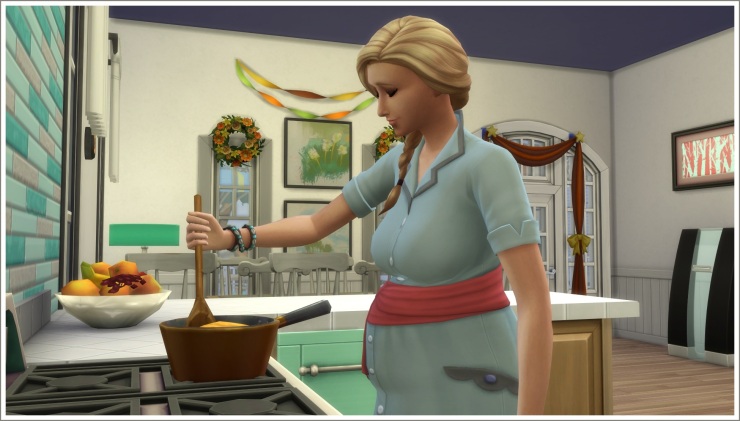 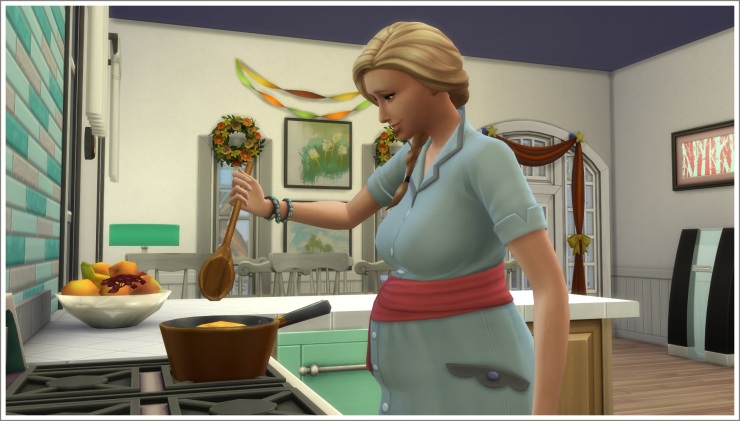 I thought nothing of it until she called me back over there.

“Uh, Adelaide, can you come over here a second?”

“Sure,” I replied, wondering what was going on. I didn’t remember inviting anyone over, especially since we were going to Eva’s baby shower in about an hour. She was 38 weeks pregnant now… and had decided she wanted a baby shower at the last minute – literally. She was due in two weeks, around December 19. I don’t know if I’d even want to do anything at 38 weeks pregnant, never mind have a party! I didn’t know what to think about the scene at the door. Yeah… there were two very official looking people just standing there while Dani and I exchanged glances.

“Uhm, what’s this about?” I walked closer to the door awkwardly, threading my fingers together. 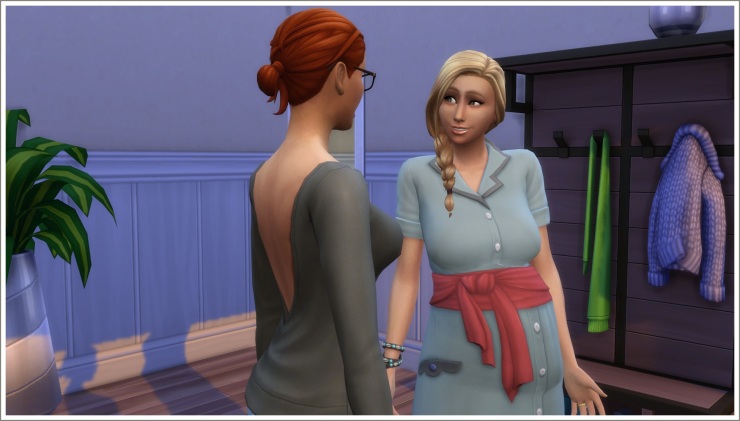 “We’re sorry to inform you that everyone that currently resides at this residence needs to evacuate immediately.”

My eyes widened and I rested my hand on my bump protectively. “What?”

“Yes. This lot is predicted to be quite affected by the plate-shifting this season. A lot of places are.”

I blinked, still trying to comprehend what was going on. They thought the land our lot was sitting on was going to change enough to warrant an evacuation? What?

“Ok, you’re Mrs. Adelaide Clemonte, right? And you were involved in the RGWI?”

“Okay, well then, we can explain this to you a bit more. Will you step outside, please?”

I crossed my arms, which at this point meant they were laying atop my belly, looking at both of the officers, since I knew what they meant. “She’s my wife. Whatever you want to tell me, you can tell her too.”

“Fine. So, you know how there are seasons and all now, and weather?”

I nodded. How could I forget, with how much the RGWI impacted my life then? With how different life is without perpetually sunny days?

“Well,” he continued, “that’s apparently changed the soil’s properties. Everywhere. It was changed in the first place after never being rained on for centuries, and not having to freeze and unfreeze with the change of the seasons. And now… it’s changing again. Geologists have determined the the terrain of the world as we know it is going to be severely altered this month.”

“Why this month? Why hasn’t anything happened last year, or even most of this year?”

He sighed. “We don’t know everything yet. I think it has something do to with the amount of time and the fact that the tectonic plates are due to move really any day now. Well, they’re always moving, but due to move a lot.”

I nodded, still unable to believe what I was hearing. The world was about to look drastically different. And Dani, Lexie, and I might be without a house. Where would we even stay? My mind was racing and it didn’t help that my pregnancy hormones were making me feel a little scrambled right now. I’m sure I’d be able to deal with this better if I wasn’t pregnant. I’d probably be able to actually think logically. Because right now, I just want to cry. They were basically saying we were possibly losing our home.

“Thank you for telling us,” I heard Dani say, her voice only wavering slightly, “We’ll be out in about 20 minutes. Should we plan to come back…or…”

“I wouldn’t. There’s no telling if this house will even still be here once everything starts happening.” He really doesn’t try to be empathetic about this. I just kept nodding as he kept going on. I didn’t even hear the last bits of what he said before they started walking back to their car. 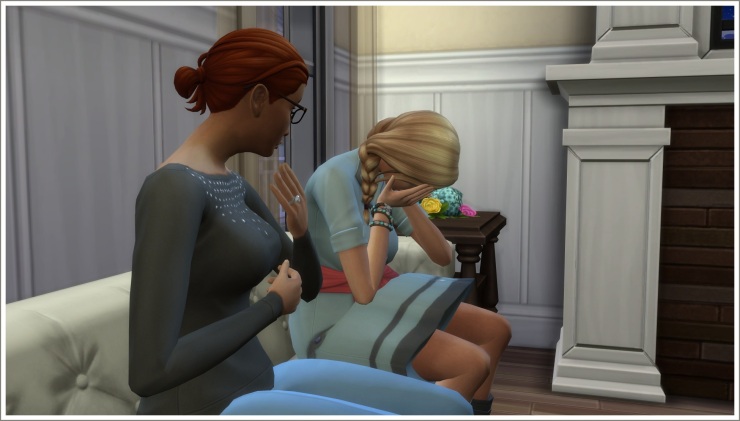 She sighed, rubbing my hands softly. “I don’t know. We’ll figure it out later, okay? We still have to get to Eva’s shower.”

We ended up getting to Eva’s place 15 minutes early. The traffic getting to San Myshuno had been surprisingly light which helped a lot with getting there. A young man opened the door, much to my shock. I hadn’t known Eva was living with anyone, she hadn’t mentioned a boyfriend or anything.

I smiled, shaking his hand. “I’m Adelaide. Nice to meet you -”

He grinned. “Right back at you. And this is…”

“Ah. Well, great to meet you both. Refreshments are in the fridge. We’ve got some nice alcoholic drinks as well as simply water,” he said, nodding toward my belly.

“Hey guys,” Eva said, walking out of the bathroom with a huge smile on her face. “It’s great to see you!”

“It’s great to see you, too,” I said, embracing her for a hug – which is pretty hard to do between two pregnant women. And….I couldn’t help but stare a little at her bump. If you thought mine was big – well, it’s nothing compared to hers. But she’s about to give birth in 2 weeks and I’ve got months to go. Gosh, I can’t believe I’m going to get so big.

Eva giggled, noticing my gaze as she placed her hand on her bump. “Oh, I know, right? This baby just keeps growing!” 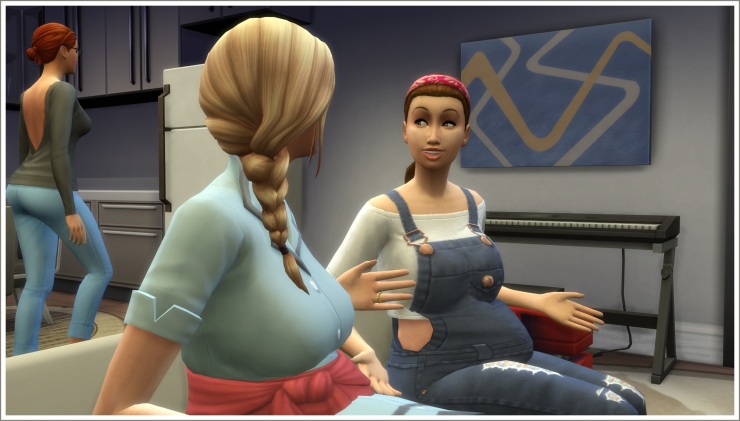 “Yeah, our girl keeps surprising me with how big I’m getting, but I suppose it’s nothing yet!” I laughed.

“Oh gosh, no. I feel huge and I have to pee every five seconds. You think you have to pee often? Last night I got up eight times!”

I couldn’t even imagine getting up to pee so many times at night. I’ve had my fair share of waking up to throw up during the night, but maybe only once to pee.

Eva laughed, looking back to where Theo and Dani were talking. “Theo? No! I’m ace, and so is he. We met a few years ago at a Pride parade. We’re kind of life partners, but without the whole romance aspect. I’m asexual and aromantic while he’s asexual and biromantic. We’re both really family oriented and knew we wanted kids, so we figured we’d try this and if it didn’t work, adoption.”

“Yeah, I guess you could put it that way. I’d tell him anything, and I know he’ll be a great dad.” 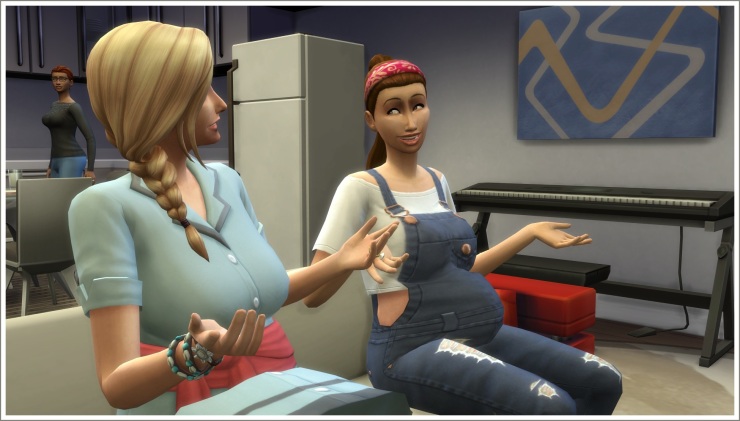 I smiled, glancing at him and Dani laughing over some joke he’d just told, and I just knew Eva was right. He’d be a great dad. She brought me over to the baby’s room and it was so cute. We haven’t made a room for our daughter yet – but there might not be a point right now since our house may not last that long. 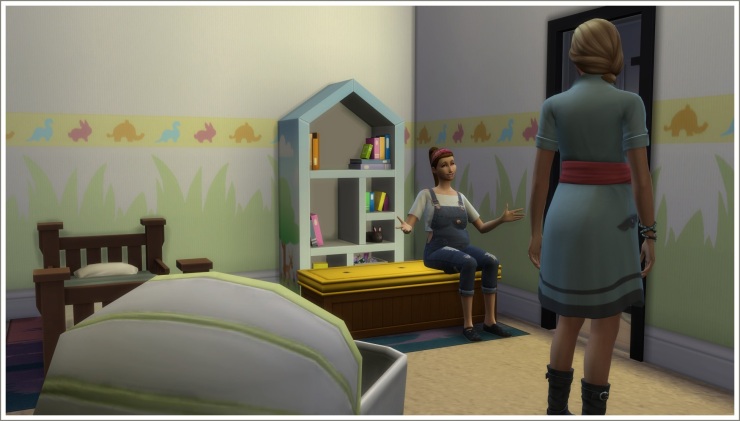 The others got here before long and it was crazy having more pregnant women around. They all understand what I’m going through and how difficult it is because they’re going through it too. We all compared bumps and cringed at each other’s worst morning sickness stories. 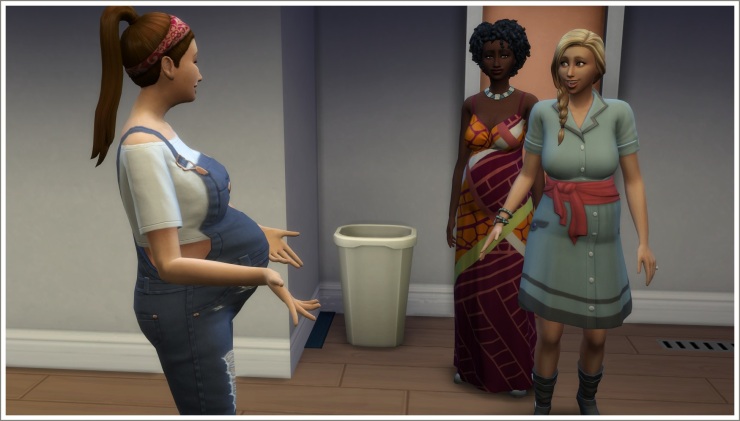 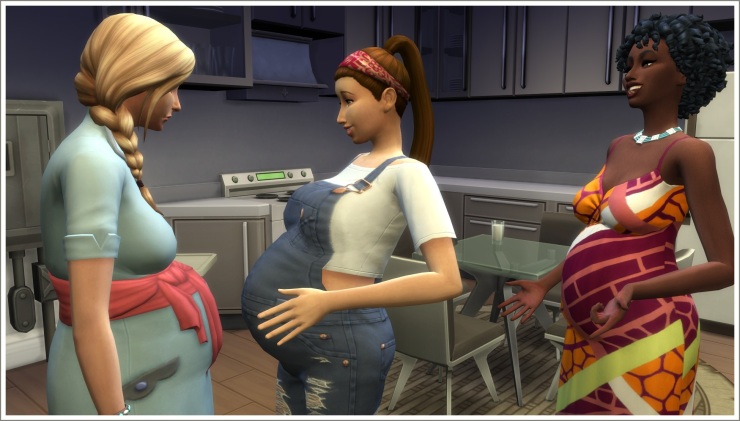 It was really fun. Jayla’s 28 weeks, about a month further along than me. She said she’s had a small bump the whole pregnancy but it’s just suddenly popped out so much.

“That’s such a nice maternity dress,” I gushed, looking at Jayla’s dress. 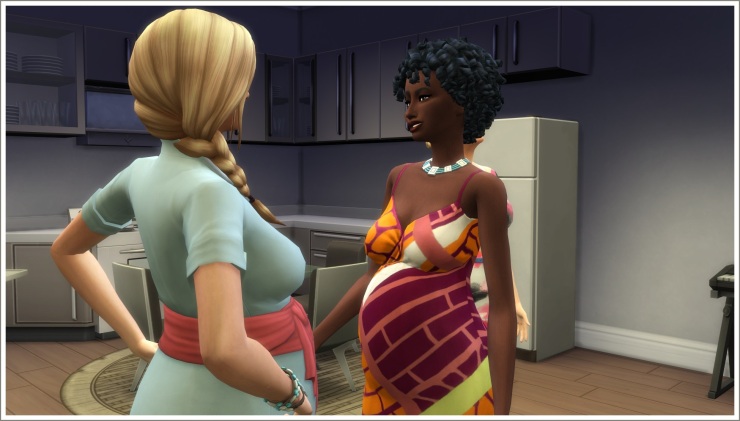 She smiled, running her hands down the fabric. “Oh, thank you! It shows off the bump just perfectly.”

“Online, can you believe it? I’ll send you the site, they have great maternity clothes.”

“That would be great, thanks!”

Jayla turned to Eva, you was on her way the the bathroom again, saying, “Your outfit is great, I love how nicely it fits!”

Eva sighed playfully, as she said, “It’s literally the only thing that fit!”

“I bet. You look like you’re about to burst, no offense.”

“None taken. I feel like I’m gonna burst, and I probably will if I don’t get to the toilet,” Eva joked, going into the bathroom.

Clare and Mariela, the other couple we’d talked to in the group, ended up running a little bit late, but it was definitely worth it with the news they had. Mariela immediately sat down and looked at her wife before announcing that finally – after five rounds of in vitro – they were finally pregnant. It was Mariela who’d gotten pregnant with Clare’s egg this time, and they were extremely excited while still also being cautious. 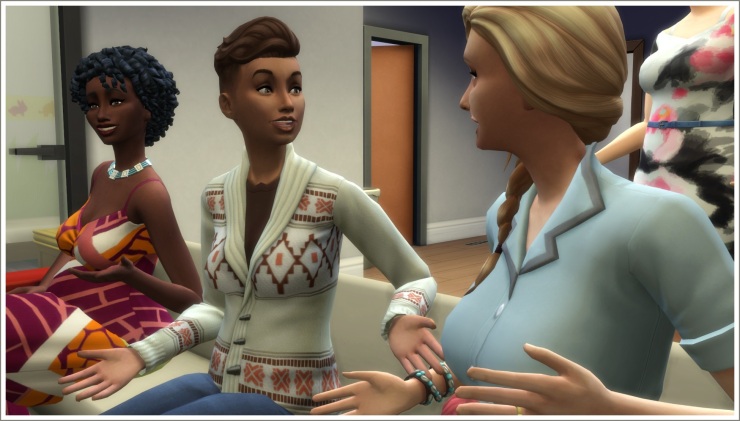 After it being so hard for the pregnancy to take, they still aren’t sure if either of them can actually carry to term. Mariela’s 7 weeks now, and you can hardly tell she’s pregnant. It seems like just yesterday that was me, looking in the mirror for any hint of a little bump, and now you can probably tell I’m pregnant from fifty miles away! (Ok, probably not, but still.)

Of course, after the party, we had to come to terms with what had just happened. We’d basically been told we had nowhere to live. We went back to get the essentials and it started to snow. The first snowfall this year. 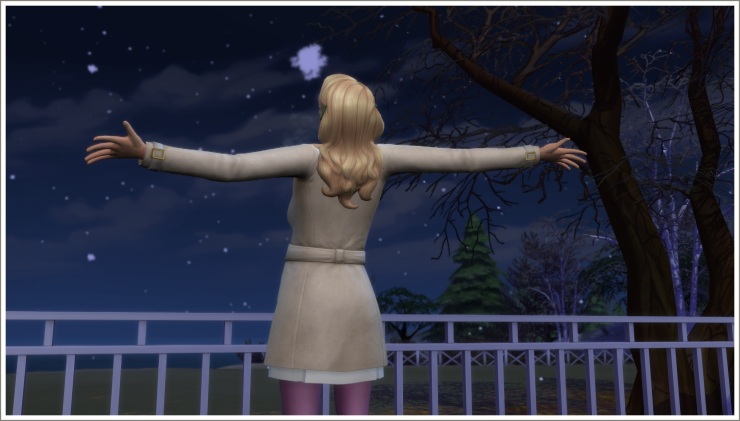 And we ended up staying with Lyric that night. 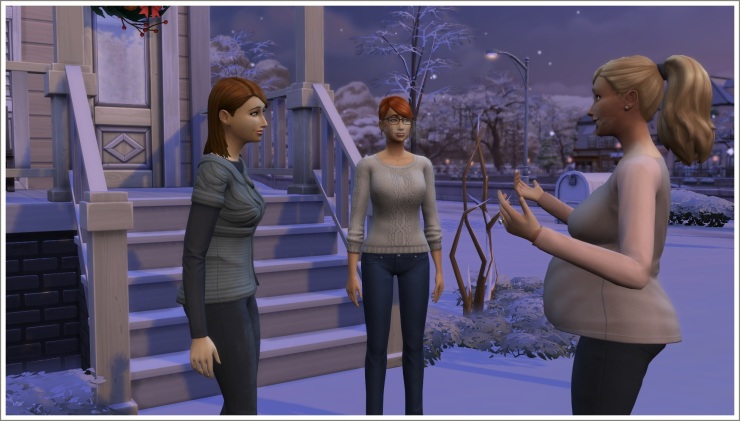 Lexie was staying with Luca until this was all over, while I was eternally grateful to my best friend for letting my wife and I stay at her place for who knows how long? I’m sure I’m not always the best to be around – pregnancy can do that to you – but Lyric insisted we stay there. As she said, ‘I couldn’t just leave my pregnant best friend and her wife out in the cold!” We can only hope we’ll be able to go back home soon enough – and that there’s a home to go back to.